This post involves the summaries of papers addressing hand detection or segmentations. 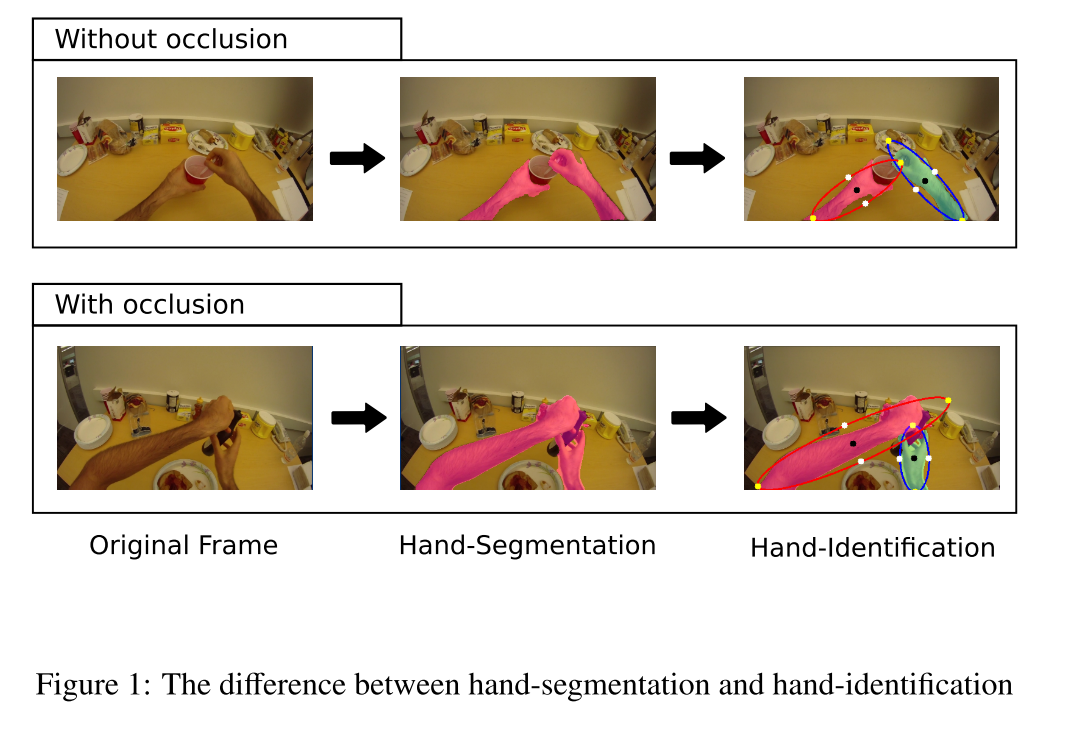 We describe a two-stage method for detecting hands and their orientation in unconstrained images. The first stage uses three complementary detectors to propose hand bounding boxes. Each bounding box is then scored by the three detectors independently, and a second stage classifier learnt to compute a final confidence score for the proposals using these features.

We make the following contributions: (i) we add context-based and skin-based proposals to a sliding window shape based detector to increase recall; (ii) we develop a new method of non-maximum suppression based on super-pixels; and (iii) we introduce a fully annotated hand dataset for training and testing.

We show that the hand detector exceeds the state of the art on two public datasets, including the PASCAL VOC 2010 human layout challenge.

This paper aims to propose a robust and reliable hand detector that can address many challenging issues or risks in human visual recognition. The challenges include detecting human hands that are varied in shape and viewpoint, closed or open, partially occluded, or have different articulations of the fingers, or are holding other objects, etc.

In general, this paper made two contributions in hand detection domain.

Hand shape detector made use of the hand shape, i.e. a hand consists of the palm and the fingers. The shape detector adopts HOG-based deformable parts model (DPM), and it is actually mixing three components, each of which is an aspect of a hand. The first two filters are both representing the frontal pose and third one demonstrates the profile. See the image below. While training, the algorithm rotates the training images to make the borders of the hand aligned to the axes. The image rotates at a stride of $10^\circ$. The bounding boxes of hands are given and kept through a thresholding and scoring function to keep high recall (90%).

Context detector is based on the assumption that the end of the arms are, in some occasions, more easily to be recognised than the hands. The existence of the ends of arms may provide significant cues for hand detection. The algorithm trains a part based deformable model from the hand bounding box training annotations to capture the features of the context as an extension of hands. The detector is also a mixture of three components just as the shape detector. Notably, the detector does not model the arm explicitly or even the adjacent body parts, but only the area surrounding the hand discriminatively, which reduces the risk of hand occlusion. Similarly, hand proposals are also given by shrinking context boxes.

Skin-based detector is based on the view that skin colours are often distinctive from the colours of other objects in the image. The skin-based detection has two steps: 1) Adopt a global skin detector to detect skin regions. Face colourd can strengthen the ability of the detector, with a reduced risk of unusual lighting or colour balances. Then a simple dual thresholding classifier determines the skin pixels. A recursive process is adopted to update skin regions by considering neighbour pixels above the low threshold as skin components. 2) Adopt Hough transform to fit lines to skin regions or draw the medial line of blob regions. Hands are hypothesised as the ends of the regions.

The paper also introduces an excellent hand dataset. To be brief, the paper presents the structure of the dataset and the evaluation measure.

I would recommend this paper to those who would like to do deep into traditional object detection. Before the fashion of deep learning (AlexNet) in 2012, the model in this paper held the last champions in PASCAL VOC Challenges for human layout detection in hand class in 2010 and 2011. Therefore, I think it might be the peak of traditional hand detection but I need to read more paper to verify my thinking.

However, I may argue that the paper reveals the bottleneck in the development of conventional computer vision based approaches. Firstly, it is still an ensemble of many models or variants of state-of-the-art methods. No novel feature extractor is proposed in the paper. Secondly, the model may hold back in egocentric videos as that there are often no faces.

Comparisons are firstly presented between models (Hand & hand and context & hand, context and skin) and results show the competence of the multiple proposal model. On signer dataset, the model in the paper outperforms other models in top 3 or 4 accuracy. On PASCAL VOC 2011 hand detection task, the model increase the AP by over twice the results in 2010.

The model is highly computationally expensive and it takes 2 minutes for a $360\times630$ image. So the model is not suitable for real-time hand detection. So the extension of the paper should pay attention to speeding up the first stage.