Develop a Decision Tree in Python From Scratch

Learn to develop a decision tree in Python using a class-based method.

The task is to write my own codes to learn a decision tree using two features (the souce clusters and the destination clusters) to predict the classification field. Therefore, the first thing step is to read cluster dataset with classification labels. Some samples of the dataset are shown in the table below:

Before learning the decision tree, a similar size-encoding scatter graph is generated to demonstrate what classes that the points (different kinds of communications) will belong to. In the scatter graph, points of the same class will be drawn in the same color. See Figure 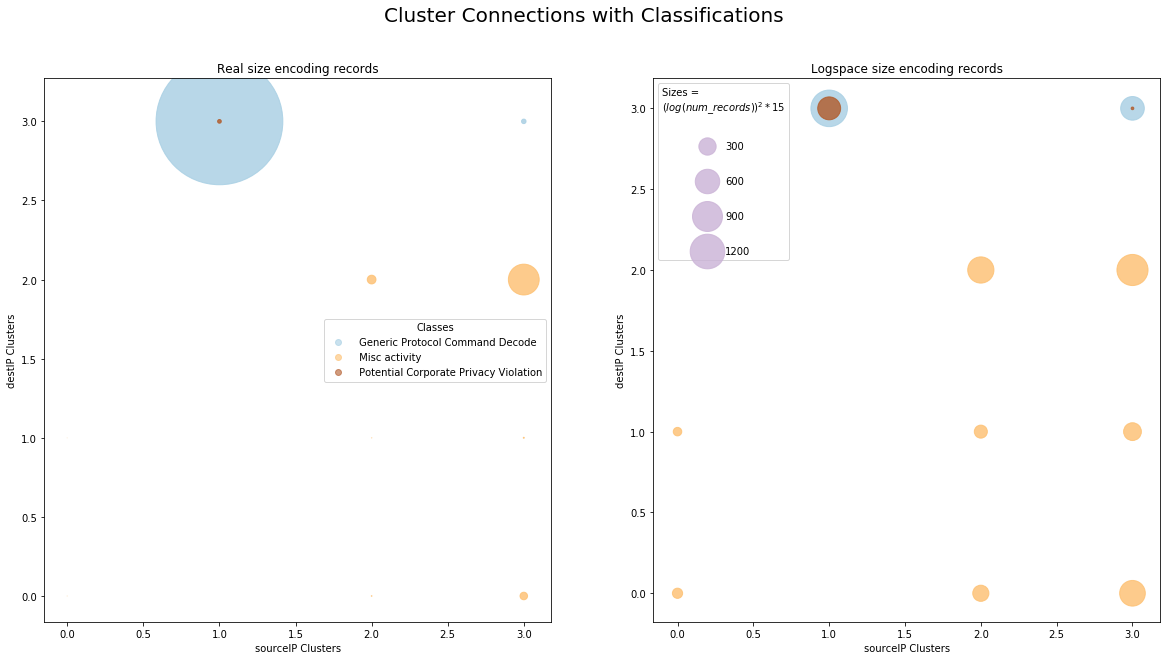 With the dataset that contains the indices of source clusters, destination clusters and the classifications in strings, the decision tree should be capable to implement decision process to split the data into branches over and over again until all the nodes can all be labelled, i.e. the nodes satisfy some standards in pre-pruning or post-pruning.

The approach proposed in this report is a class-based implementation. Following the structure of a binary tree, I firstly built a class called Node whose instance holds the attributes like data, depth, classificatoin, prev_condition (the condition that brings the data to this node), ... The way of connecting the nodes in two layers is by specifying the left son node and the right son node since the decision tree in the implementation is a binary tree. In addition, backuperror and mcp (misclassification probability) are also defined to help the algorithm perform post-pruning. There is only one Python class method in the class: set_splits, which is just a quick way of assigning values of the attributes related to how the node comes from its parent node.

Then a class called DecisionTree is created. This class defines how the decision tree takes in training data, how it learns to split the data, how to classify a node, how to visulise a decision tree and how to predict the classifications of the input test data, etc. Significant instance objects includes root (the root of the decision tree, and it will be assigned a Node instance), criterion (based on which criterion the impurity is calculated, such as entropy, Gini index and misclassification error). Other objects are mostly about the configurations of pre-pruning and post-pruning. Details are given in the following sections.

A general decision tree performs its branching by finding the optimal splitting method with the maximised information gain or the minimised degree of impurity. Three methods are used to calculate the impurity: entropy, Gini index and misclassification errors. Their equations are listed below:

Also, a function to calculate the Laplace-based misclassification probability is also provided. This leads to a similar results of computing misclassification error. The reason I implement this method is to reproduce post-pruning given in the course learning materials.

If the data of a node has only one class, the node should be pure and be prepared to be classified. If not, further branching may be required according to the configuration of pruning.

When the node is pure (holding only one class) as introduced above, it is necessary to classify the node with the class it has. However, in some cases, the node should be classified even if purity is not satisfied. For example, pre-pruning in my method defines a minimum number of samples of a node, indicating that even if multiple classes exist in the node, classification is required since it has reached the lower limit of sample amount. The way of classifying is to assign the class with the largest number of records to the node.

While the most crucial point of decision tree is braching, data splitting is the most significant job as it prepares data subsets for the son nodes in the deeper level. The data set of a node has several columns within which the columns except the last one are features to be differentiated and the last one contains all classes. Iteration can be implemented in these feature columns and the values of the fields. Meanwhile, the algorithm will find the best feature and the best threshold by which the data is splitted. The steps taken to find the optimal feature column and the threshold are as follows:

Pruning is a method to constrain the branching of the decision tree. If no pruning is performed, all nodes are divided until the son nodes are all holding one class in its data set. The configurations of pre-pruning and post-pruning are shown below.

Pre-pruning comes into effect in any cases of branching, which is different from the configurations of post-pruning. Three standards are defined for pre-pruning:

Post-pruning is based on the back-forward calculation of errors. After the tree has been learned, the algorithm computes the backup error from the bottom of the tree and performs a propagration to the top root. But in my implementation, the process turns out to be a recursive procedure that starts from the root node and return the backup error of the two son nodes. Recursively, the left son node will be assigned with the backup error of its son nodes.

Dynamic programming turns out to be quite useful and effective in my implementation but there is one more thing to do: keeping all nodes that have been visited in memory. The way I implemented in codes is to built a First-In-Last-Out (FILO) stack to contain all nodes the recursive process is visiting. After the backuperror is calculated for one node, this node is poped out from the stack for the subsequent processing of the remained nodes in the stack. The combination of dynamic programming and stack iteration is also used to merge son nodes with the same class and to visulise the decision tree. 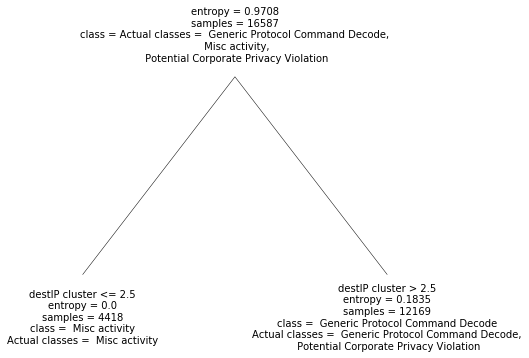 This situation can be indicated by printing the confusion matrix while testing the decision tree. The test set is input to the predict function and a list of predicted classes is generated. I made use of both the ground truth classes and the predicted classes to produce the confusion matrix and print the precision, recall of the classification, shown as below. Obviously, all samples with class Potential Corporate Privacy Violation are the unseen data.