&quot;In geometry, a normal is an object such as a line or vector that is perpendicular to a given object. For example, in two dimensions, the normal line to a curve at a given point is the line perpendicular to the tangent line to the curve at the point."

Rephrase "JK is perpendicular to AB" as:

"In geometry, collinearity of a set of points is the property of their lying on a single line.[1] A set of points with this property is said to be collinear (sometimes spelled as colinear[2]). In greater generality, the term has been used for aligned objects."

Generally, this chapter introduces the basic knowledge of kinematic chain and illustrates the parameters of the chain, which leads to the significant link frame, the basis of D-H convention.

Generally, a kinematic chain, as a model of a robot serial-link manipulator, is a set of bodies, called links, connected by joints. The joints may be simply revolute joints or prismatic joints which have only one degree-of-freedom (dof) while they can also be quite complex with more than one dof. However, we tend to imagine all joints of a robot have only one dof because a complex joint is regarded as a combination of several single-dof joints, which make no difference to the analysis of the chain.

Reddy A. Chennakesava, Difference between Denavit-Hartenberg (DH) classical and modified conventions for forward kinematics of robots with case study

Note that the assumption does not involve any real loss of generality, since joints such as a ball and socket joint (two degrees-of-freedom) or a spherical wrist (three degrees-of-freedom) can always be thought of as a succession of single degree-of-freedom joints with links of length zero in between.

To know more about joints, check: To be finished

Here comes the introduction of the specification of a manipulator using links and joints.

To specify the elements, four parameters are used:

A coordinate frame (frame i) is attached rigidly to each link (link i).

Each joint has a joint axis. By convention, the z-axis of a coordinate frame is aligned with the joint axis.

A minimum of six dofs is required to describe an end-effector in space (position: 3 dof, orientation: 3 dof). To analyse a forward kinematic problem, we need the joint variables.

The displacement of joint is denoted by $q_i$ and is called joint variable. The collection of joint variables $q=[q_1,q_2,...,q_n]^T$ is called the joint vector. To define a point (the position of the end-effector), dimensional vector is used: $r=[e_1,r_2,...,r_m]^T$. The manipulator mechanism $r=f(q)$ defines the relation between r and q. 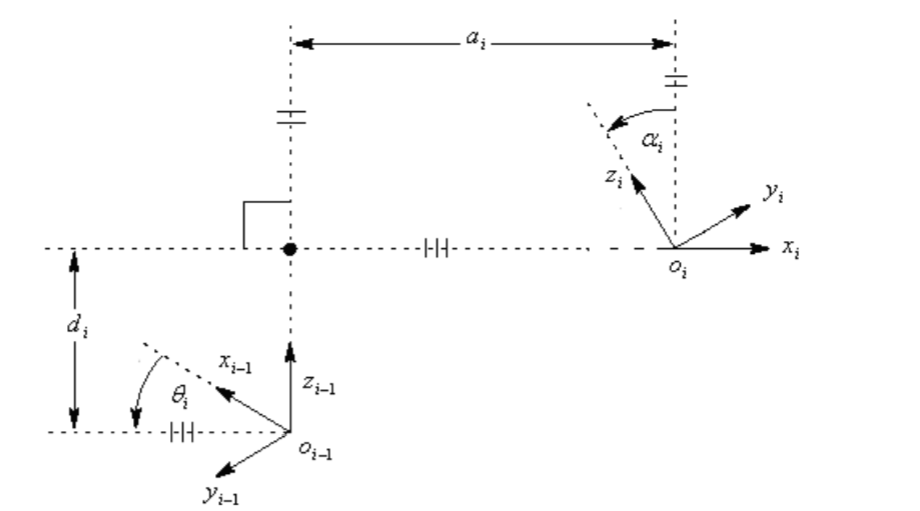 Link parameters determine the structure of the link. In terms of size and shape between joint i and joint i+1:

It is a form of parallel projection, in which all the projection lines are orthogonal to the projection plane,[1] resulting in every plane of the scene appearing in affine transformation on the viewing surface.

Joint parameters are the distance and angle between adjacent links and they determine the relative position of neighbouring links. In terms of relative displacement of the joint i:

Define an coordinate frame $o_ix_iy_iz_i$attached to link i: 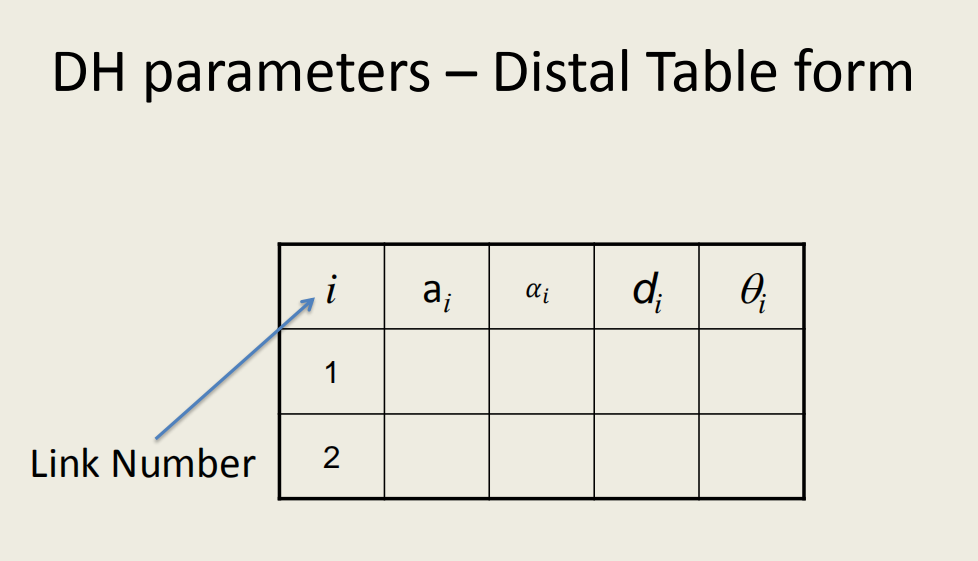 3330be1
修复不安全的第三方图片链接
Feedback
Edit Me?
分享：